Topic:  Our WATER and Hydraulic Fracturing.

Every thriving, prosperous community depends on a clean, uninterrupted supply of water for its livelihood. That’s a fact.

Every Hydraulic Fracturing operation depends on that same clean water supply for its livelihood. That’s a fact.

What will be disclosed and discussed are the facts presented by Doug Shields, former Pittsburgh City Council member, faced with the same dilemma of having to share their precious, limited, priceless, nonrenewable water resources with their new neighbor, Halliburton.

Anyone that uses water on a regular basis will want to come to this meeting to see what our future holds and what our options are. Answering questions, concerns is what this is all about.

Here’s the Agenda. It is a discussion panel format.

1. Fracturing Facts -Stephen Murray -Baldwin Hills Oil Watch supports a coalition of environmental groups and activists who have a wide range of concerns within and around the Inglewood Oil Field.
2. Sacred Water – Mother Earth. Hua Anwar- Metis Elder and Clan Mother sharing traditional knowledge and healing practices of the indigenous community.
3. Keynote speaker – Doug Shields former city council member of Pittsburgh City PA, first community in the United States to effectively  ban fracking with a rights-based ordinance. Everything you wanted to know about the effects of fracturing on a community before, during and after the fact. A look into our future.
4. Mladden Bandov of SLO Clean Energy to talk about local energy needs and options available with clean renewable resources that give communities more power, resiliency, control, and long-term electrical rate stability.

5. Ben Price of CELDF and Shannon Biggs of Global Exchange on what a local rights based ordinance looks like and what the long and short term effects are,  what to expect from the opposition and the best part, what the opposition can expect from us.

Well, the long and short of it is YES.  How do we know we are getting fracked?  San Luis Obispo sits on the 4th largest gas and oil reserve in the United States, the Monterey Shale. 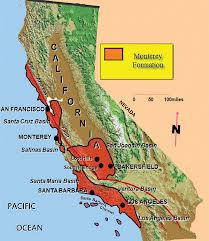 Harvesting gas and oil  is the primary business of the largest, most organized, insidious operation in the world, Halliburton.   Everyone has heard of Halliburton just not in the context of it setting up shop in our own backyard. It has many AKA’s like, BP, Shell, Exxon, PXP   I say insidious because 50% of the people in California don’t know what Hydraulic Fracturing is or that Halliburton is behind it. We are learning more and more about it by talking with communities that have been fracked. Here is a great article on  5 Fracking consequences you never heard about.    If you are in the wine industry or a farmer or a rancher you might want to take a look at this report.

Hearing about the consequences of Fracking from the communities that are living proof that it causes irreparable and irreversible damage to the water and air is the first step to stopping it. It also proves that the consequences are not isolated instances but rather the modus operandi and cost of doing business for the Frackers.

The Frackers know exactly what is going to happen to the water and air because they have done it a million times before and the consequences are always the same. It destroys a living environment.

What we haven’t heard is that frankly they just don’t give a damn about us or what we love and care about.   They don’t have to. It is no skin off their nose because it’s not their water or air that is getting rendered unlivable for man or beast. It is ours. And  all we can do, once they set up shop, is recover from the aftermaths by suing them for damages that are inevitable.  And since they have more time and money than god settling a few lawsuits here and there is a mere annoyance,  like a knat on an elephant’s tit.

The real question here is How much is clean water and air worth? Can we really put a market value on something that is priceless in terms of we simply can’t live without it? Suing Frackers for contaminating the water and air is like saying o.k. you killed something we can’t live without and you can’t bring it back to life so we will take x amount of dollars in exchange and call it even.

Getting sued by a community is figured into the cost of doing business for the Frackers and the modus operandi of the smartest, most organized and insidious operation on the face of the earth.  Threatening to sue them for damages doesn’t stop the harm from occurring or even slow it down.  In fact, they are so good and expert at this game they can sue us first for damages to their bottom line if we even think about saying NO to getting fracked.

So now what? Now we ask ourselves, Do we, the living, breathing, thinking, caring,  part of a community, criminalize and BAN Fracking for the atrocity it is or do we try to change the Fracker’s attitude and ask them to please be a little more careful with their toxic chemicals in our community?  The answer to that question will determine the course of action that will be decided at a Town Hall meeting.
SLO is holding a Town Hall meeting.  And attending this meeting will be  representatives from the 150 communities who have successfully ban and criminalized fracking and other similar atrocities, like sewage sludge, gmo’s, hard rock mining and factory farms, proving where there is a will there is a way.  And, just a reminder.  The David and Goliath story?  David won.

Tom Linzey of Community Environment Legal Defense Fund, CELDF.org  lays it all out here in the video.

If you want to learn more, have questions, want to get involved,  do something. come to the Town Hall meeting on April 16 at the Grange on Broad Street, San Luis Obispo. and bring someone you care about with you. Guaranteed something will change because you did.